The role of awns and their loss during domestication 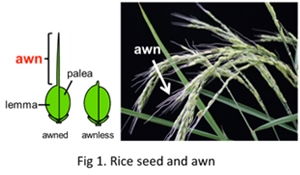 Most of all wild rice species have a spike-like structure on the tip of seed, called awn (Fig.1). The awn is composed of an elongated vascular bundle in the middle of the lemma with a length of up to 20 cm. The role of the awn is to protect from feeding damage and to help seed dispersal by attaching the seed to wandering animals (or humans). However, long awns with barbs are thought to hinder manual harvesting under agricultural conditions. Therefore, artificial selection by early humans selected against the presence of long awns. The majority of cultivated rice varieties today does not show awn formation.

The genetic basis for awn generation 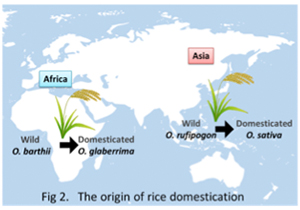 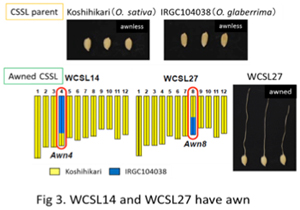 The domestication of cultivated rice started independently in East Asia and Africa. Asian rice, Oryza sativa evolved from wild O. rufipogon, whereas African rice, O. glaberrima, evolved from O. barthii in West Africa (Fig. 2).
We made CSSLs (Chromosome Segment Substitution Lines) named RSLs and WBSLs containing introgressed genomic segments of O. rufipogon and O. nivara (a close relative of O. rufipogon) respectively（ref. 1）, in the genetic background of O. sativa. There are 2 lines which have awns among those CSSLs: RSL11 which is including a segment of chr.4 of O. rufipogon and WBSL18 which is including a segment of chr. 8 of O. nivara. Those segments carry the AWN4 and AWN8 genes, respectively, which are responsible for awn formation in the wild species. AWN4 has been already recognized An-1 by Chinese group in 2013 (Luo et al., 2013).
We also observed awn formation in WCSL14 and WCSL27 which contain segments of chr.4 and chr.8 of O. glaberrima in the genetic background of O. sativa, although neither parent has awns (Fig. 3). Likely, O. glaberrima lost its awns because of other factor(s) than AWN4 or AWN8.
This is the first report that two independent cultivated crops acquire the same morphological feature through mutations in different genes（ref. 2）.